Many traditional fishing methods have been passed down on the Nagara River, including cormorant fishing with a 1,300 year history, shoal net fishing, night net fishing and so on.

Living with the river, river fishermen of the Nagara River

River fishermen also work to clean up the river and protect fishery resources such as spawning grounds for ayu. 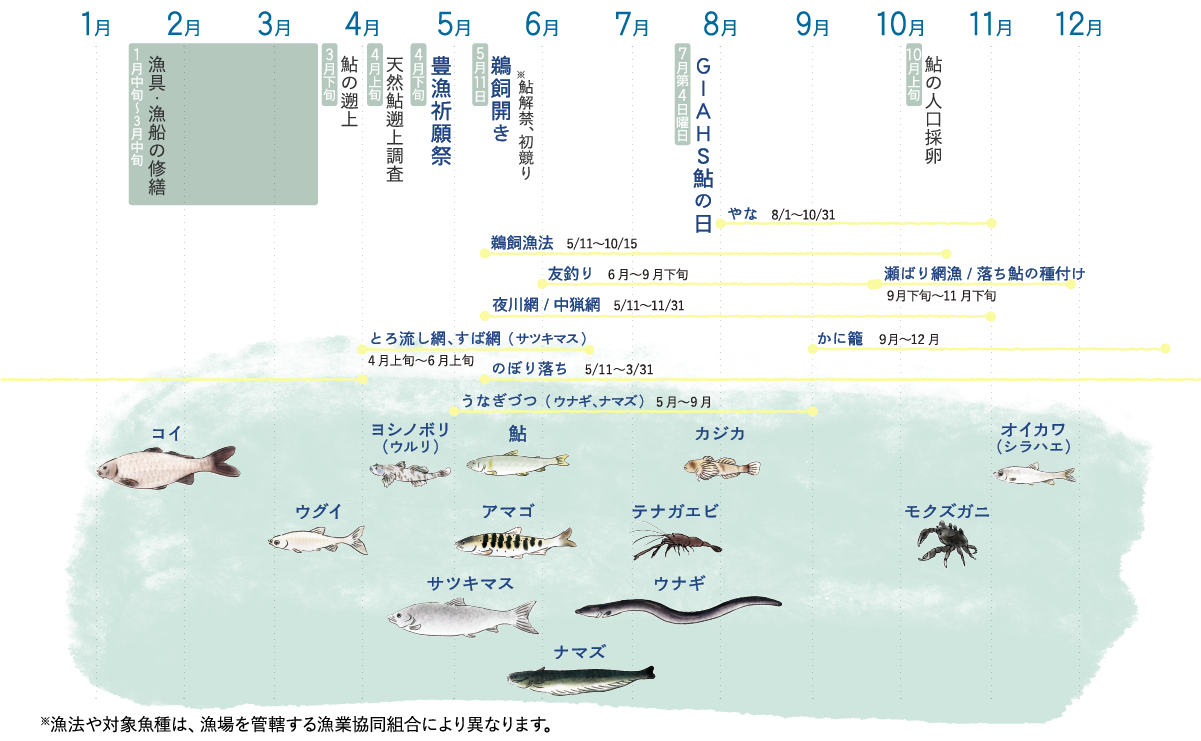 In order to secure a stable supply of natural ayu fish, river fishermen seed ayu fish every year at the fishing grounds in Gifu City. From October to the end of November, sperm and eggs are squeezed from ayu fish that come down to the estuary for spawning grounds, fertilized, and then the fertilized eggs are attached to a palm tree fibers and placed in the path of the mouth of the river for rearing. After hatching in about 10 days, the young fry migrate to Ise Bay and return to the river in the spring.

The fishery cooperatives protect the natural ayu resource by fishing for ayu near the estuary weir so that many of the young fry can go down to the sea.

Traditional Fishing in the Nagara River

Cormorant fishing is one of the traditional river fishing methods representing the Nagara River, and it is popular among tourists for its beautiful appearance.

Cormorants are water birds with a habit of swallowing fish. Cormorant masters control the cormorants using ropes and make them spit out the ayu on the boat. The brightness of the fishing bon fire and the sound made by tapping the upper edge of the boat at night surprises the sleeping ayu. Ayu turn their body around and the cormorants dive into water to catch gleaming ayu. Ayu which are killed instantly by the cormorant are particularly fresh and said to possess the finest taste. Ayu caught in cormorant fishing have bill marks of cormorants on their bodies, which makes them highly valued.

Ayu fish that have been instantly killed by cormorants are said to be in the freshest condition and taste the best.

It is the practice of casting nets in shallow waters in autumn, startling ayu and catching them as they head downstream in the autumn to spawning grounds with a net. As they are confused, a large group of fish can be caught once by using a handheld cast net. By the words of the fishermen, it is called “soji”,”mawari” or “odoshi” in Japanese. This is a typical feature of the Nagara River in autumn.

This traditional method involves scaring ayu with the bright light of torches and the sound of oars smacking against the edge of the boat, chasing them into nets spread across the river.

Now it is held in Minami-cho of Gujo City, upstream of the River, and in Mino City, the middle-course.

This fishing method has been practiced in the middle and downstream areas from spring to autumn.

It is used to catch fish that travel up rivers, luring them into boxes at dams while they travel upstream, using the habit of crawling on the riverbed of Ajime-loach and Japanese sculpin.

This fishing method has been practiced in the middle and downstream areas from spring to autumn.

Near the riverside of the shallows, stones are piled up in a funnel shape toward the downstream, and a cylindrical net called Ue is placed in the narrowed area. The ayu are chased along the piled stones and let into Ue when going up the riverbed. There are various fishing gears and devices depending on the regions and fish types.

It is a long-lasting fishing method having a large catch from ancient times.

In order to catch fish as they travel downstream, large fixtures of slatted wood called yana are set up on the river, with several locations in total along the Nagara River. Yana fishing takes place in autumn and its fishing spots are often bustling with visitors who come to enjoy the ayu cuisine prepared there, which is called “Sightseeing Yana”.